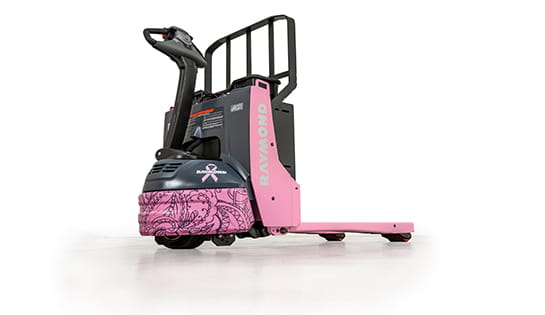 “Charitable Contributions in our communities is something we are devoted to here at Heubel Shaw. We have seen first hand the positive impact even the smallest gesture can make” states Chris Cella, President. “Due to the overwhelming support we receive from within our communities, Heubel Shaw has raised over $91,000 for charity since 2014, a large portion of this amount coming from the Pink Pallet Jack Auction which we run along aside other dealers in the Raymond network.”

This year, Heubel Shaw started its fundraising efforts early with its first ever BBQ Contest for a Cure.  Across 11 locations in 7 states we had 22 teams (66 employees) and 31 customers, participate at their local offices to see who had the best BBQ all while raising awareness for Breast Cancer Month. It was amazing to see the comrodary between employees and their communities.

Immediately after that on Oct 8th, Heubel Shaw St. Louis took the reigns, and hosted their 1st Annual PINK Saturday - Trivia Night & Silent Auction. In under 45 days, the Heubel Shaw team led my manager Matt Murphy, rallied to put together to date the largest earning charitable event ever for Heubel Shaw. Raising over $12,000 in just 4 1/2 hours. All of the money raised by table donations, raffles, silent auctions, food, etc... will be donated to American Cancer Society of St. Louis on Nov 1st.

With 2 more week to go in the month of October, it will incredible to see where Heubel Shaw finishes off.